Tutorial: How to Install Recessed Lighting

Slowly but surely, we’re checking projects off our to-do list here at Heardmont. With most projects around here, we tend think and stew on them for a while and then tackle them full-force over one weekend until they’re done. Our latest lighting project was no different. We decided to replace the huge fluorescent light fixture in our kitchen with recessed lighting.

Call them what you want – can lights, pot lights, or recessed lighting – but I’ll take any of them over the light box that lived in our kitchen until recently. 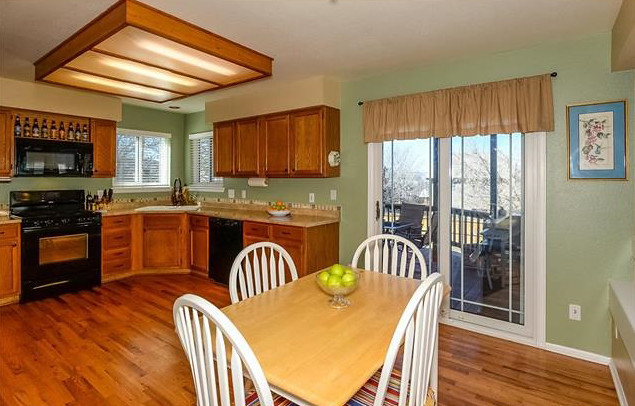 We actually tackled a very similar project in our first house (a one-story ranch), but we were hesitant to attempt this one because our current home is two stories. This meant that we couldn’t wire the fixtures in the open attic above the room like we did back in Arkansas. Read on to see how we made it work this time around.

Here’s a closer look at the offending fixture. You might notice that one of the plexiglass panels was actually cracked; I honestly can’t remember if it was like that when we moved in or if we cracked it trying to determine how easy it would be to remove. Either way, it wasn’t too upsetting, knowing that we’d be ripping out the fixture as soon as we found the time to do it. 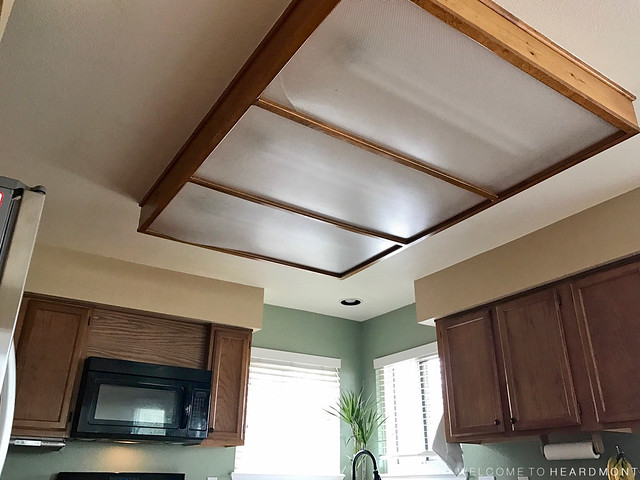 Disclaimer: we are not professional electricians. Please follow this tutorial at your own risk and consult or hire a professional if necessary!

Here is how we took down the fluorescent box, replaced it with recessed lighting, and made our kitchen ceiling feel about two feet taller.

To take down the fixture, we first removed the plexiglass panels (they were just floating in the frames). Then, WITH THE POWER OFF, we unscrewed and disconnected the three fluorescent fixtures. There were wires running between the fixtures, but all that was left after we took them down was one power cord coming out of a rough hole in the ceiling.

The wood frame was really heavy, so as we unscrewed it from the ceiling, Stephen built this brace with a 2×4 and clamps to make sure it wouldn’t fall on us as we pulled it down. 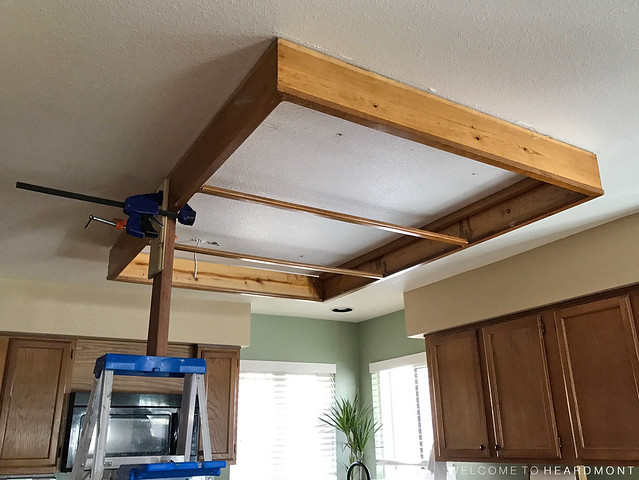 Once the frame was down, we got a closer look at the condition of the ceiling and determined which way the ceiling joists ran. Ours ran parallel to the stove/microwave wall, which helped us decide where we should place the can lights.

Before we get into the “how to” of installing recessed lighting, here are the supplies we used.

Each light housing includes a template you can use to determine the placement of your can lights on the ceiling. We originally purchased six housings and six LED lights but chose to install only four based on the spacing on our ceiling. We did use the fifth LED to replace the CFL bulb in the light above the sink so that all the bulbs would match. 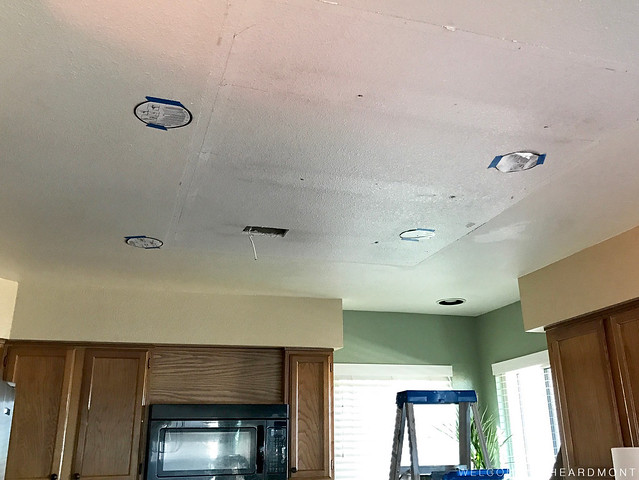 After the photo above was taken, we decided to move the template in the far corner further out so that the layout of the four lights would form a rectangle. Once we were happy with the placement of our lights, we traced the templates and used the drywall saw to cut the circles for each of the housings. Then we attached the junction box to the joist inside the rectangular hole in the ceiling, with the power cord you see here going into one end of the box. 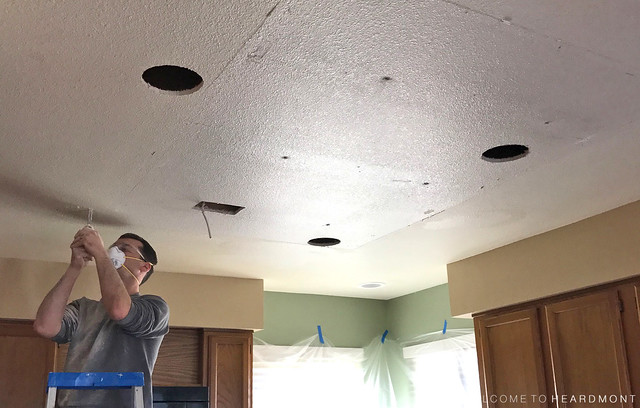 Running the wire to each hole was probably the trickiest part. Here’s a diagram I drew showing how we did it. Wiring is in red with the wood ceiling joists in blue. The junction box (where the power comes to the room) is located at the rectangular hole with power going out in two directions. The two lights on the left then connect to the two lights on the right. We ran the power this way so that we’d only have to thread the wire through a hole in one joist for each pair of lights. See how the red lines from the junction box only cross one blue line each? 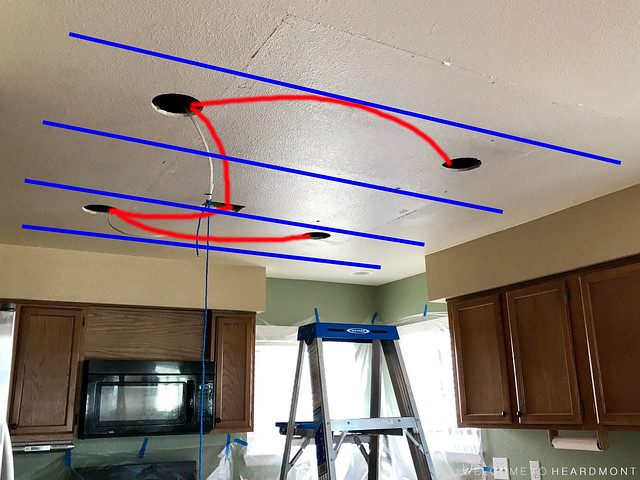 Here’s how the same view looked after we’d run power to the two lights on the left. Getting the wire to each of these two holes required drilling a 1″ hole in each ceiling joist and threading the wire through. 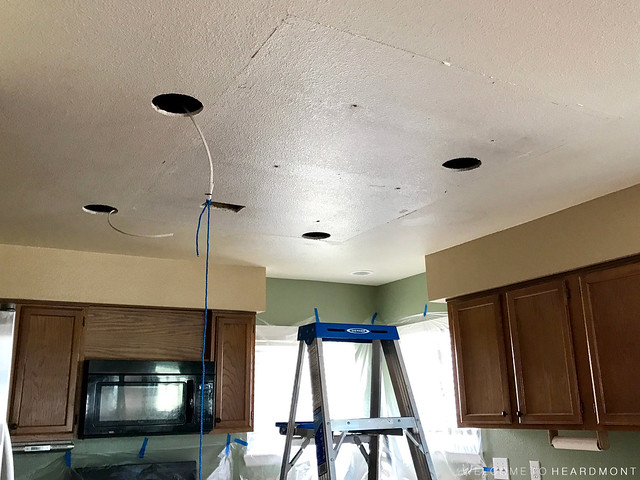 You can find easy wiring diagrams online to show you how to connect the wires at the junction box. Once all the wiring was in place, Stephen connected a recessed light housing at each hole using wire strippers and wire nuts. The housings came with a wiring diagram to show how the wires should be connected. 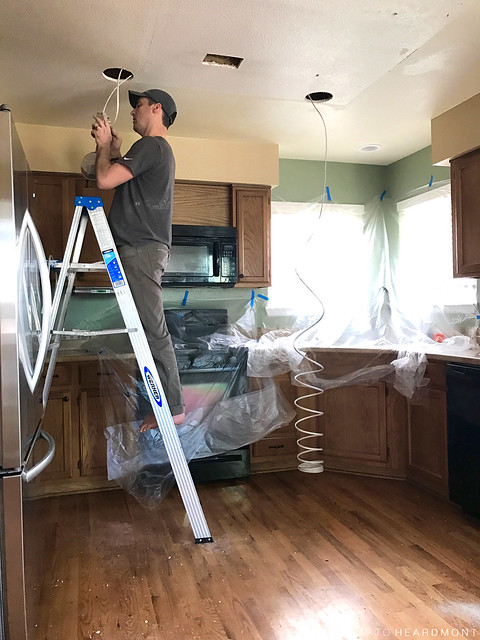 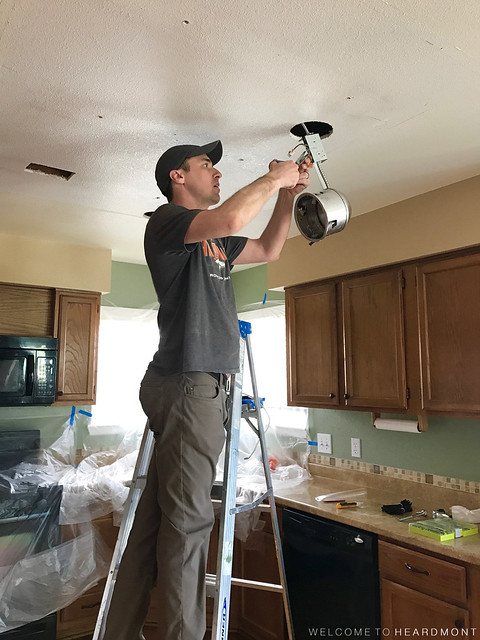 Finally, after the housings were installed, we attached the LED lights. The bulb and white trim come as one piece, so installation was pretty simple – flipping out some tabs and screwing the bulb in. We chose soft white CREE LED fixtures to conserve energy. 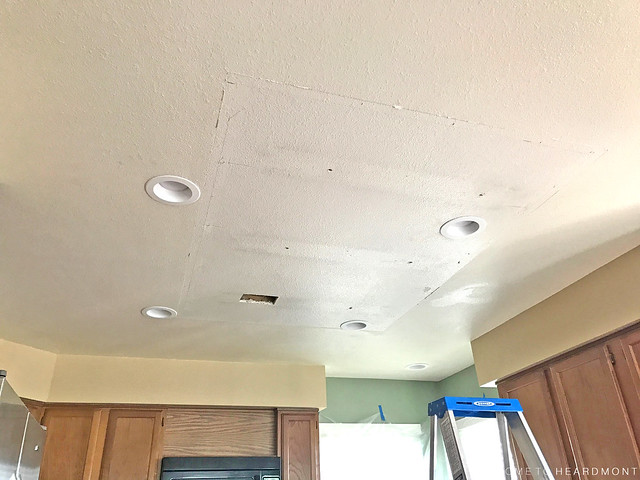 At this point, we turned the breaker back on to test the lights. It’s always a feeling of accomplishment (and relief!) when you flip that switch and they actually work! 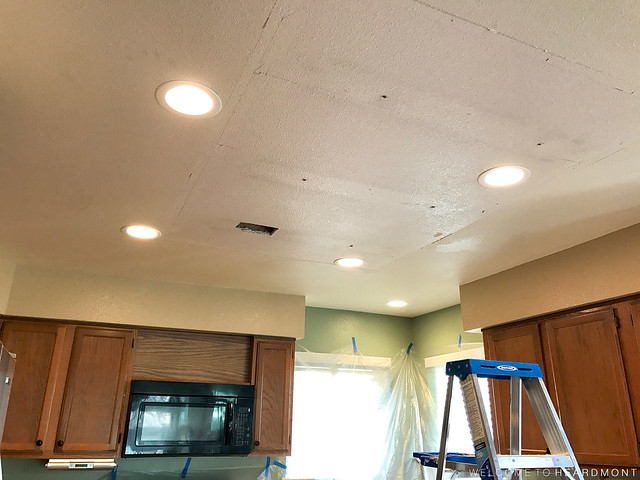 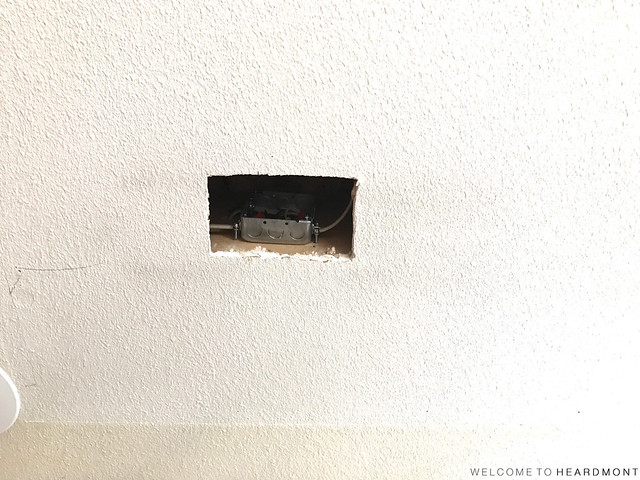 Because this hole was large enough to require a full drywall patch, we attached two braces across the hole. Our braces are actually just the long paint stirrer sticks from Home Depot, which was a tip we picked up from one of the associates there! 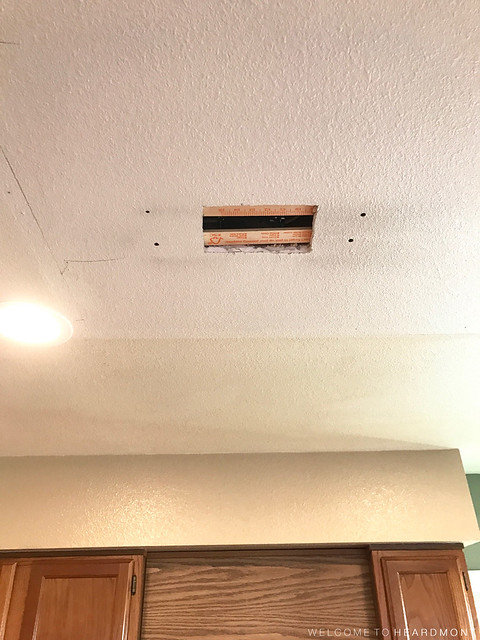 We cut the drywall patch, dry-fitted it, and attached it to the braces using drywall screws. I wrote a really extensive tutorial on creating drywall patches like this one HERE. 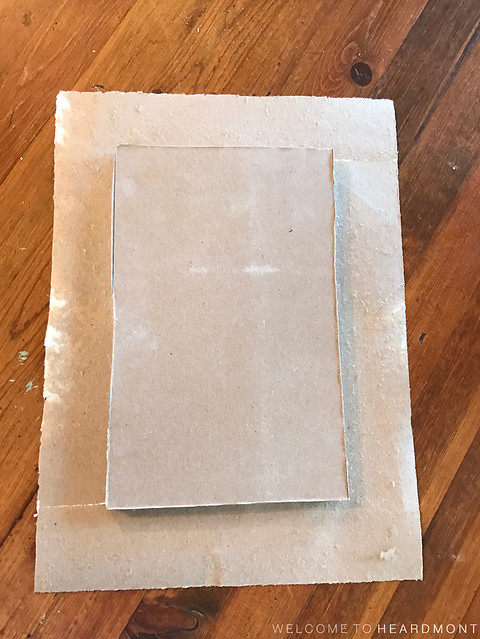 After the patch was spackled (this is my absolute favorite spackling), I applied orange peel texture to it and around the border where the previous light box met the ceiling. This stuff on the medium setting did the trick! 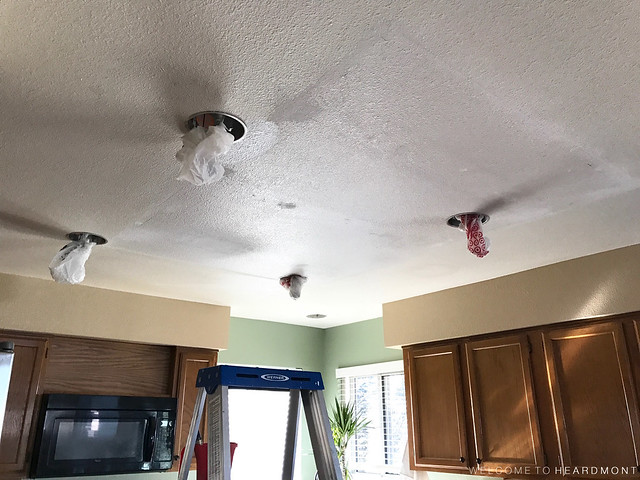 You’ll notice we also removed the lights prior to applying the texture and … drumroll … painting! Here’s a glimpse at our newly painted ceiling, free of all fluorescent lighting! 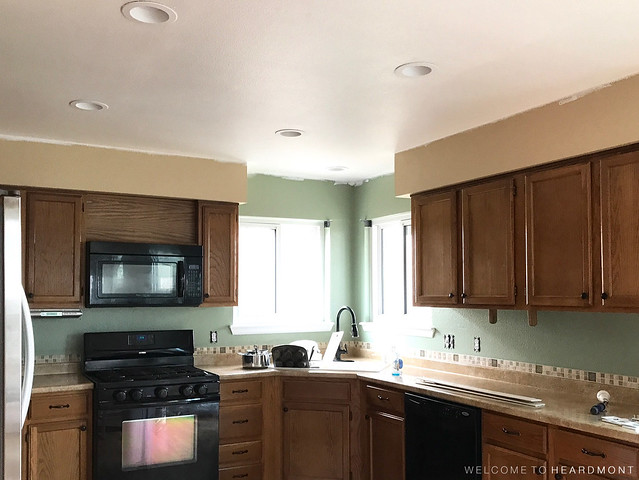 And yes, the lights still worked when we turned them back on. 🙂 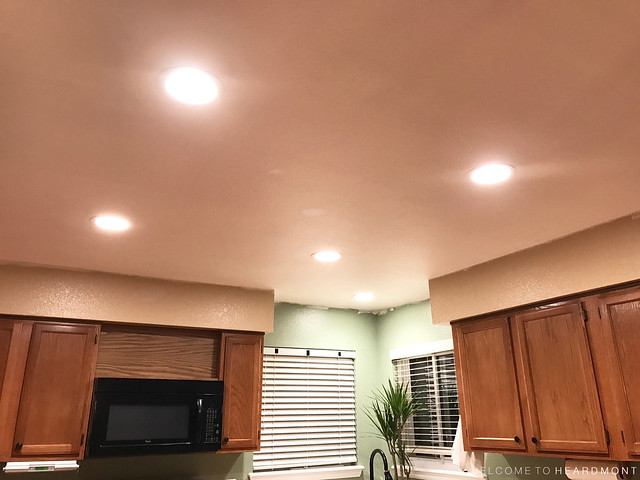 I honestly can’t believe how long we waited before we made this relatively quick and inexpensive update (under $200) or how much better and brighter our kitchen looks now! 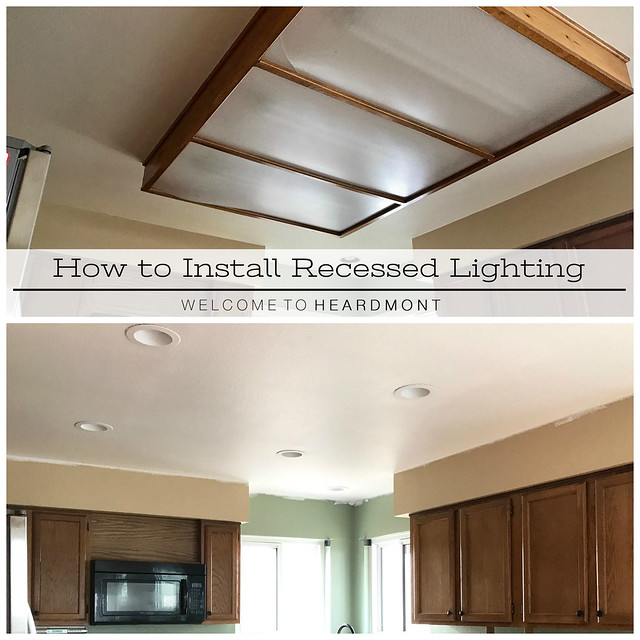 Of course, painting a ceiling is like giving a mouse a cookie, it leads to other painting projects. Stay tuned for a peek at the rest of the kitchen!

This entry was posted in kitchen, tutorial. Bookmark the permalink.