It’s hard to believe I’ve been pregnant for 40 weeks, but it’s true! (I honestly never thought we’d make it to the 40 week photo below!) 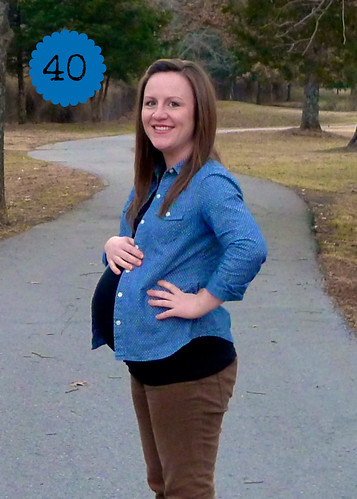 At my 35 week appointment, we were told that our little girl was coming early. Obviously that prediction was wrong, but it was enough to make us pack the bags, install the carseat, finish the nursery, and check all those other pesky to-dos off our list.

Now, five weeks later, we’re (not so) patiently waiting on little Libby to make her debut. Looks like we may be having a March baby after all!

We’ll be sure to share the big news when it happens, but in the meantime, I’ll be posting Part 2 of our Almost-House Buying adventures tomorrow. Have a great weekend!

This entry was posted in Babies, My Pregnancy. Bookmark the permalink.