Master Bathroom: Taking Down the Wall

Last time we chatted, I shared that we were about to start on our master bathroom renovation. At the time, we weren’t quite sure how much of a project we’d be taking on, but we knew this room needed some changes. Would they be simple cosmetic upgrades or something bigger? 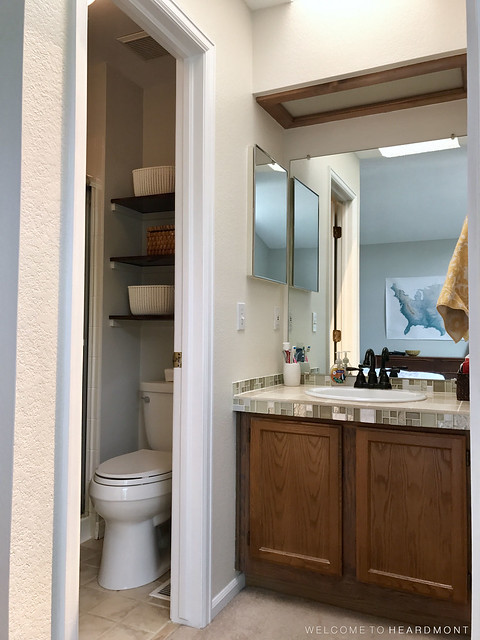 We mentioned that we were considering removing the wall between the vanity and toilet, and most of you here on the blog, on Facebook, and on Instagram said to go for it! With nervous grins on our faces, we got to work taking down. that. wall. 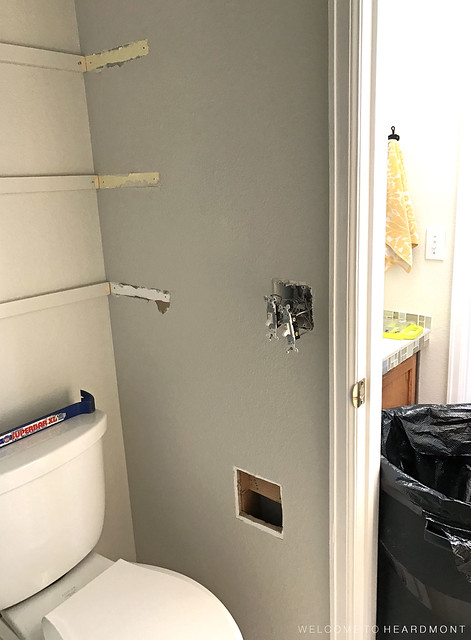 This was no ordinary wall. It housed three light switches and one GFCI outlet, so we approached this more as a deconstruction project rather than a demolition derby. We started by turning off the breakers to the room and cutting out a chunk of drywall to determine where the electrical wires ran in the wall.

If you’re taking on a similar project, here’s a tip: Use your phone or camera with the flash on to take photos up into the wall to see wiring and other hazards. By doing this, we were able to see which portions of the drywall were safe to cut and which we should avoid. 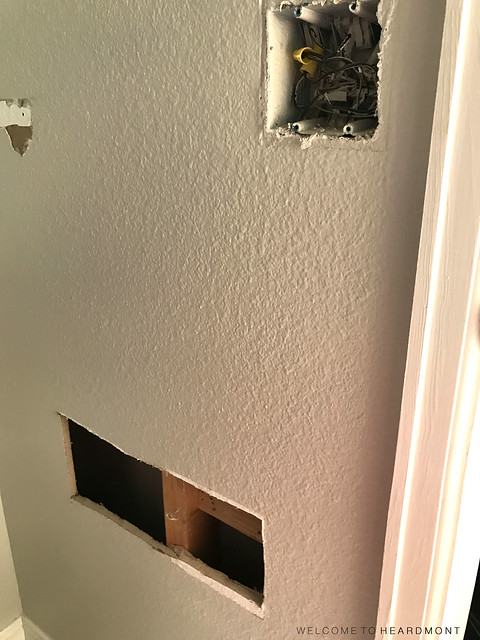 I’m not going to lie, with this project, Stephen was definitely in charge of the demo and electric work (I’m a good assistant!). The next steps (drywall, finishing, and “making it look pretty”) will be my responsibility. Here’s a shot after we took out the medicine cabinet and the back of the wall to show that we made it through! 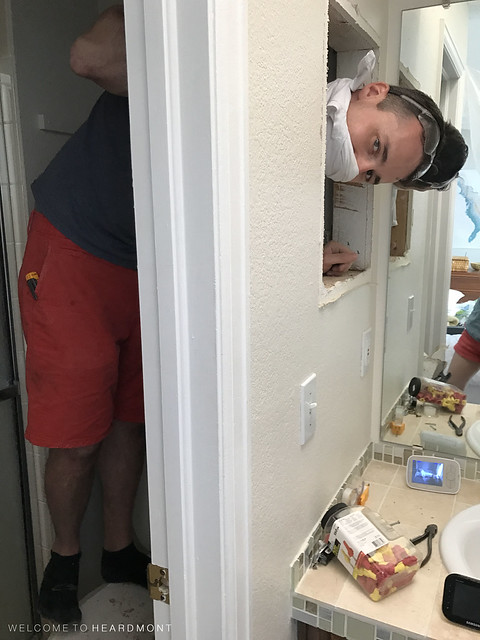 (Complete with baby monitors. Naptime is the only time for projects at Heardmont!)

Here’s a look at the other side of the wall. We were definitely excited to see it coming down and starting to realize how much work rewiring all that electrical was going to be. 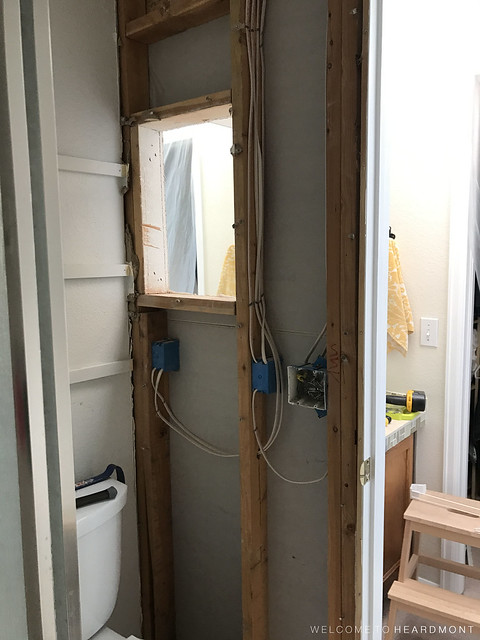 Finally all the drywall was gone! At this point, the amount of light in the toilet/shower room was amazing! We knew we were making the right decision. 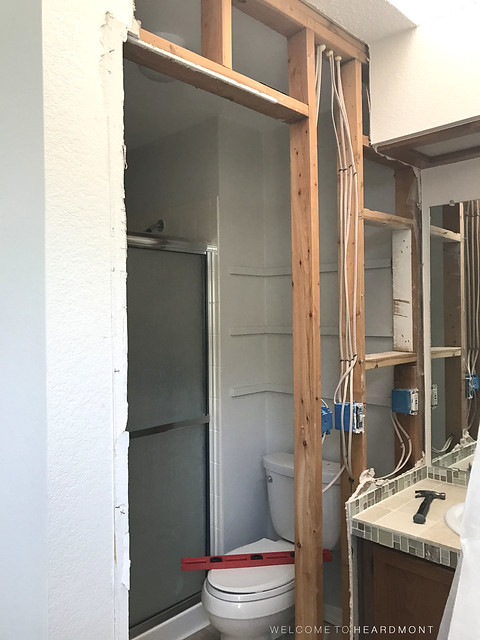 Once the drywall was down and before we could remove the studs, we had to move the wiring. Here’s another tip: Label your wires before you unhook them. You may think you’ll remember where every cable goes, but it’s easy to get confused once they’re all hanging from the ceiling. Just label them! 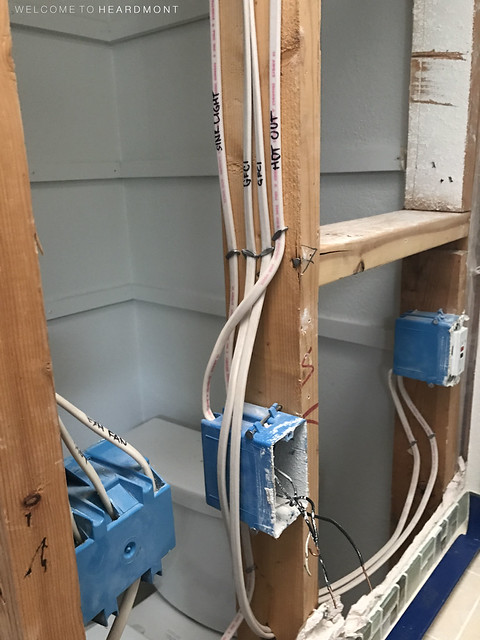 With our wiring all labeled and out of the way, Stephen used a hand saw to cut the studs one at a time and pull them off the nails in the ceiling and floor. 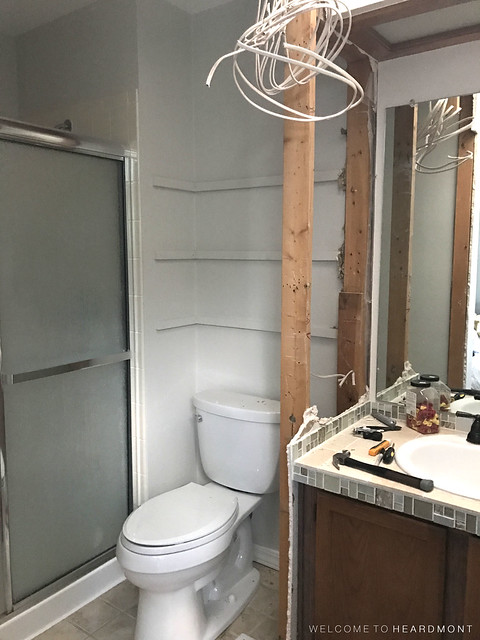 Can you even believe it?! No more wall! 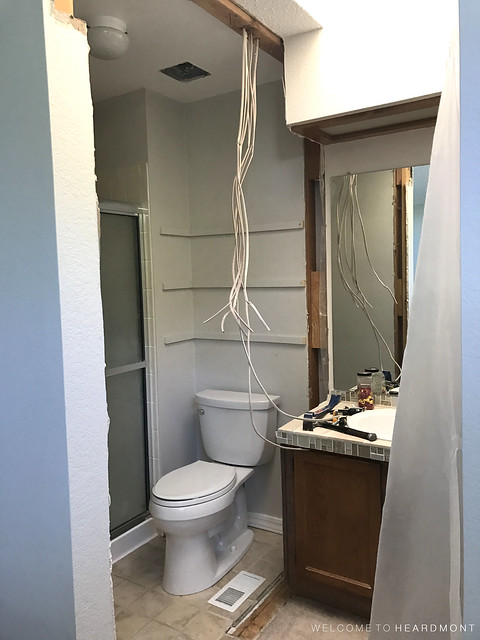 Stephen also took down that light box (the whole reason we started this project in the first place!) and then we hit a snag. The beam in the ceiling at the top of the wall was not structural but had to be cut out because it was resting on the wall studs. Thanks to social media and generous friends (thanks Jenny and Jonathan!), we were able to borrow an oscillating saw (like this one) to cut through the beam and pull it off the ceiling. 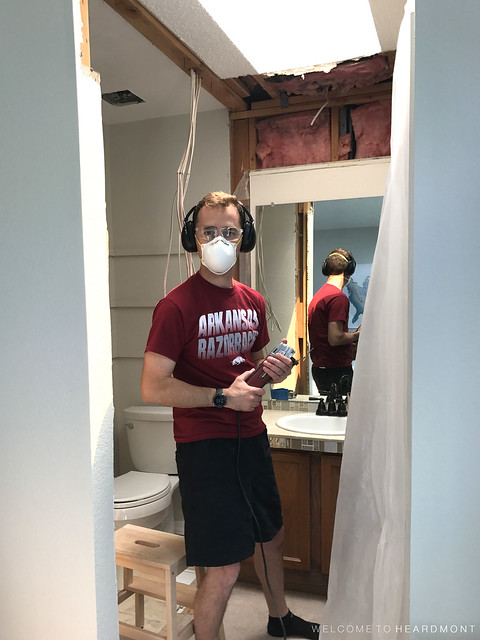 After all that, the demo was finally done! 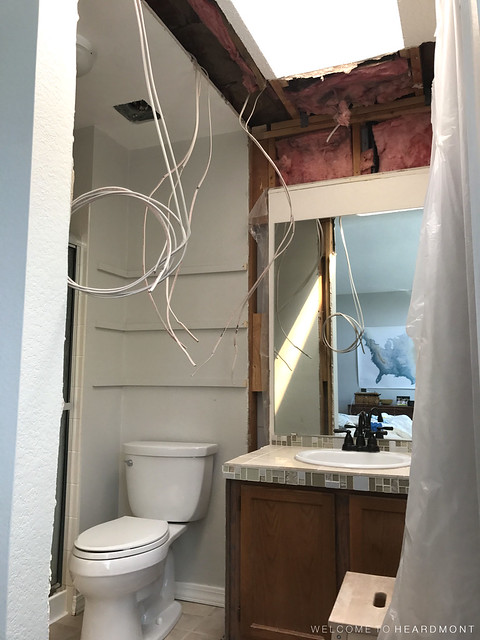 Even though the wall removal wasn’t the quickest project, it has made such a difference. We’re still using the bathroom because we left all the plumbing intact until we are ready to replace it, and we can actually both brush our teeth at the same time now! No more bumping elbows! 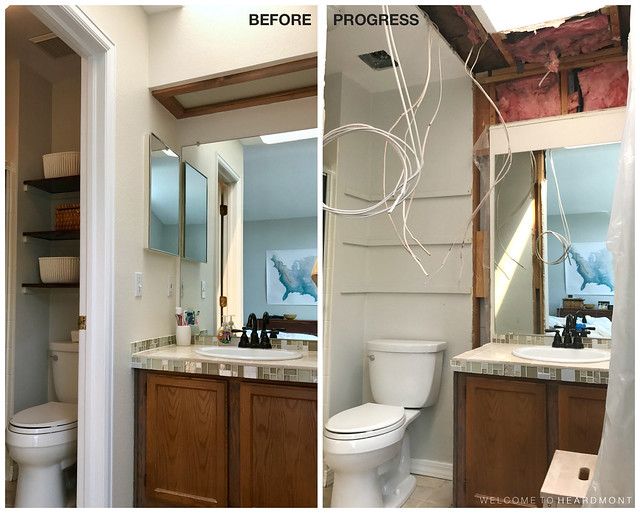 Stay tuned for more progress. Next up, doing something with all those loose wires and fixing all those holes in our walls! What do you think of our progress so far?

Want quicker updates on this project? I’ve been posting a lot of progress shots to my Instagram stories (on my Instagram page, click on the rainbow circle around my profile photo). I’d love for you to follow along!

This entry was posted in Before and After, master bath. Bookmark the permalink.