Installing Can Lights in Our Dining Room

If you recall this photo from yesterday’s drywall patching post, you probably have a good idea what we were up to in our dining room over the holiday weekend. 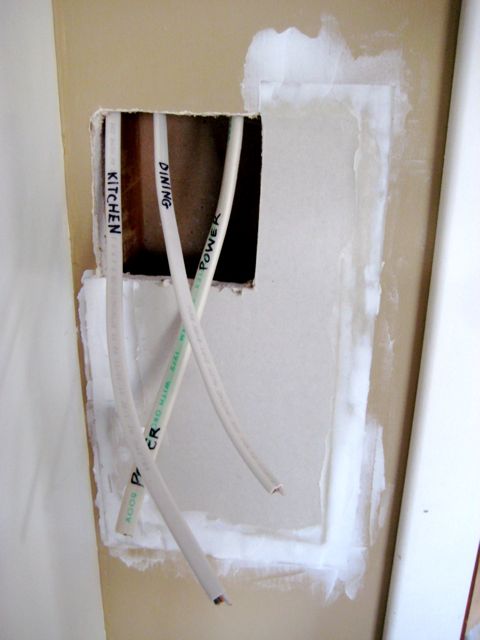 We were installing six of these bad boys – can lights! 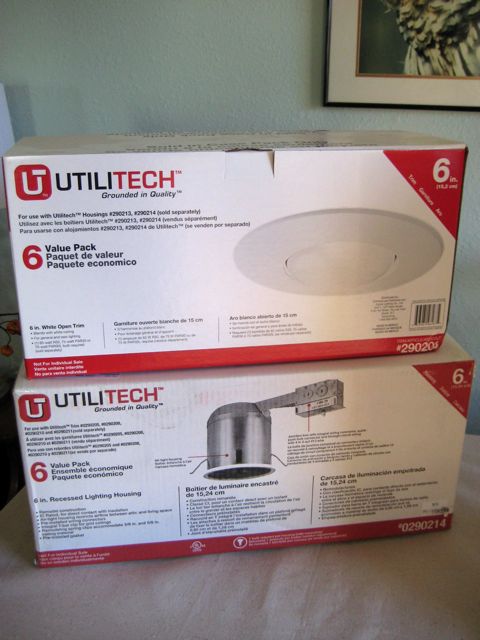 We (of course) took photos to document the process, so here’s a look at our dining room ceiling before we started.  It’s important to note that we turned the POWER OFF to our entire house during this process.  Some people might just have flipped the breakers to the dining room and kitchen, but we’re scardy-cats when it comes to being electrocuted. 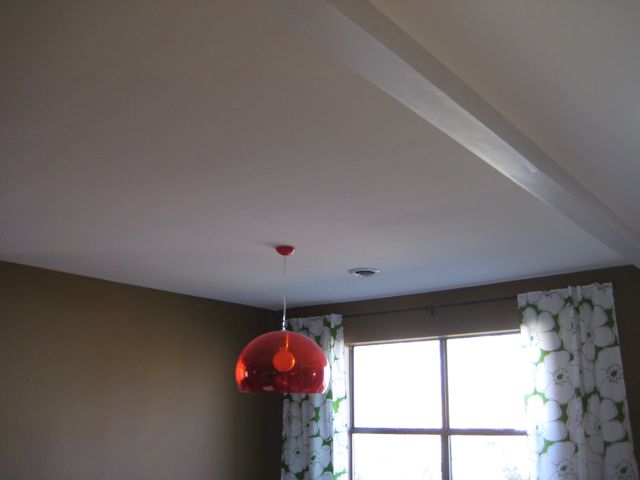 We decided we wanted the six lights in an evenly spaced grid across the ceiling, so after measuring the short wall and the long wall and dividing to get the right spacing, we figured out a great way to make sure all the lights were lined up correctly. 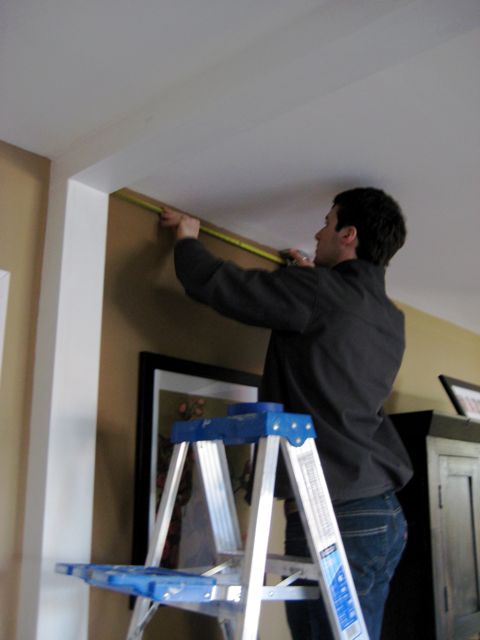 Then we taped up a black thread to run between the two points.  We did this twice since we wanted two rows of three lights each.  After some quick measuring to double-check, we had a great guideline for our can lights. 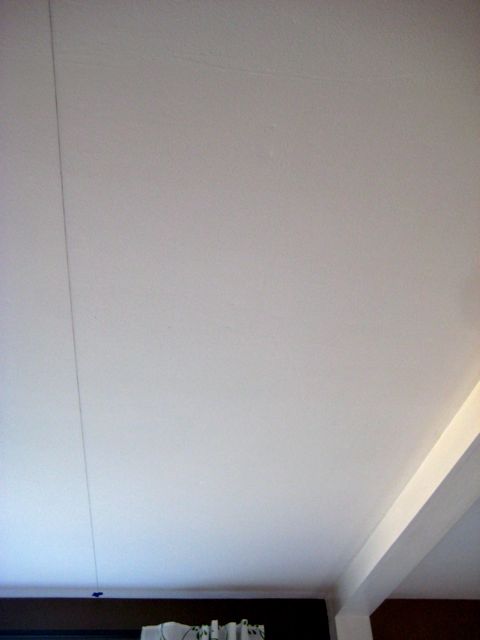 Next, we checked for studs (or ceiling joists) in the ceiling behind our thread lines.  One of our lines ended up being too close to a stud, so we had to move it over a couple of inches.  The other one was in the perfect spot, so it stayed put. 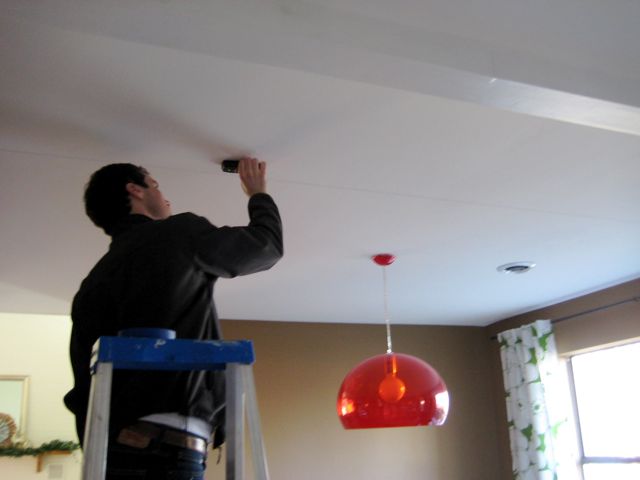 Then Stephen measured along each thread line and hammered a nail into the spots where our three can lights would go. 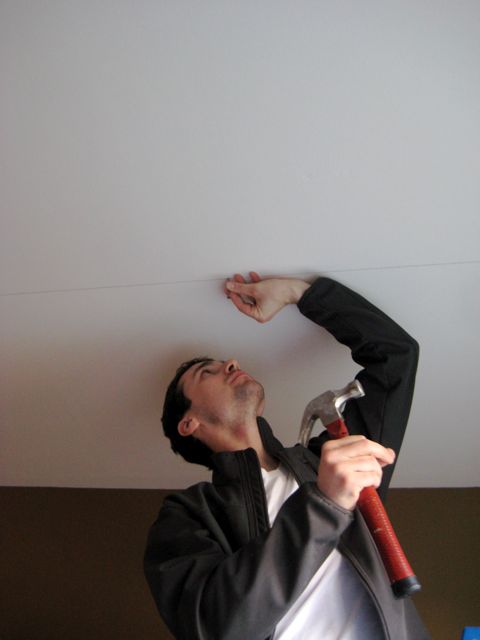 This was a useful step because when he went up into the attic, he could clear the insulation around the nail and it wouldn’t fall through the ceiling when I started cutting the holes. 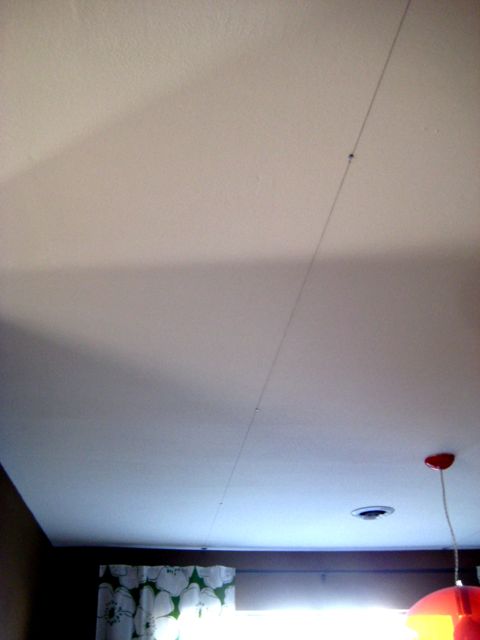 Each can light came with a template for cutting the hole in the ceiling.  I centered the template on each nail and traced it. 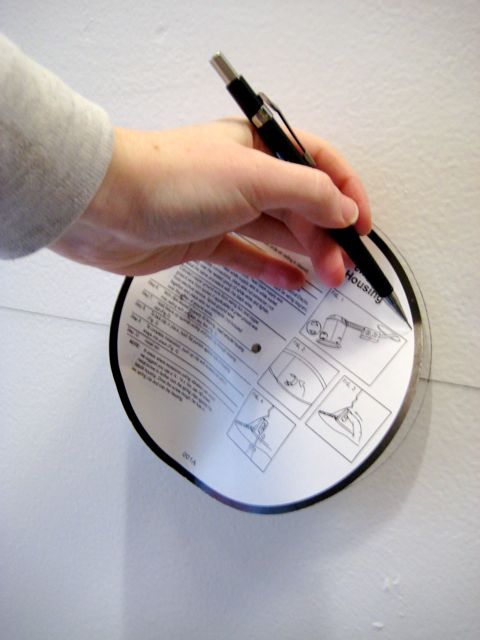 Remember that line through the middle is just thread, so we didn’t have any erasing to do once we cut out the hole. 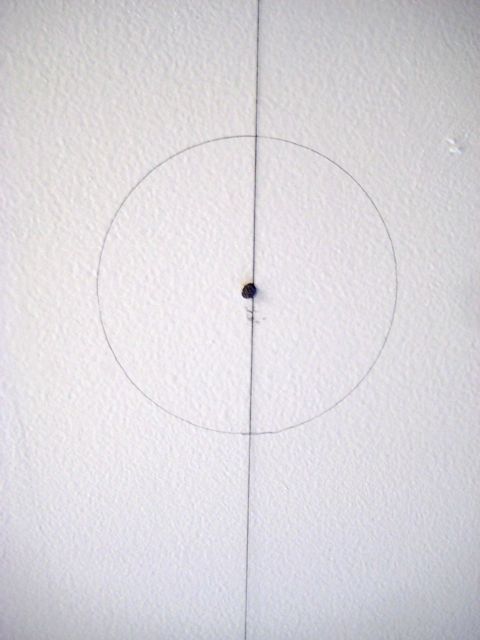 I used my drywall saw and cut out each of the 6 holes.  We couldn’t get a true action shot of this because Stephen was up in the attic running wires while I was cutting.  You can see on the drywall scrap how I started my drywall saw in the center where the nail was and cut out to the edge to cut out the circle. 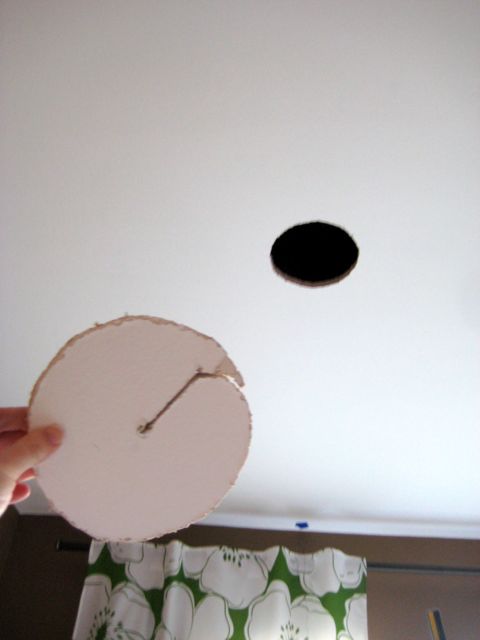 It was at this point that Stephen showed me an extra board he had up in the attic.  Genius that I am, I suggested he throw it down through the hole and I’d catch it.  Bad idea!

That board took one bounce off my hands and hit me square on the forehead!  I still have a knot – what was I thinking???

As the daylight started to fade, Stephen finished running the wires in the attic and came down to wire up the can lights. 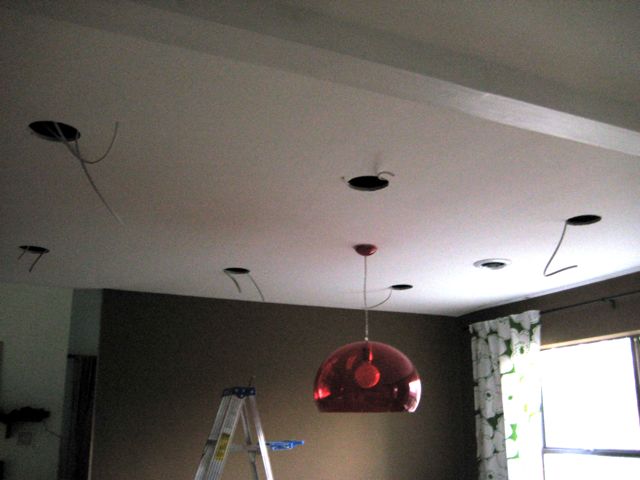 By this stage our power had been off for about 5 hours.  Did I mention it was probably 30 degrees outside?  Our house started to get reallllly cold. 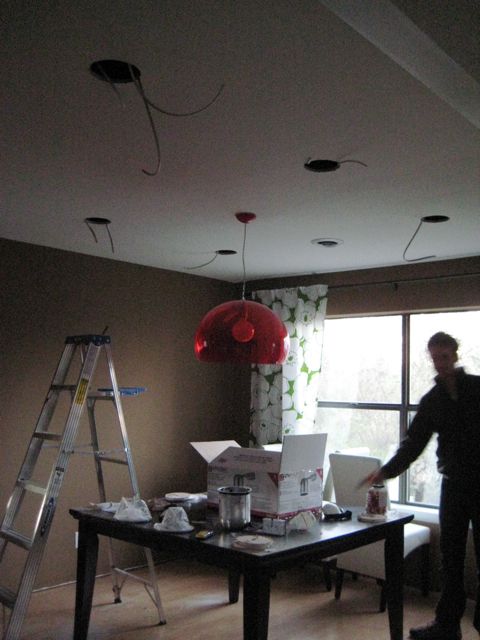 Here is Stephen with his trusty headlamp, wiring up one of the can lights.   I had to use my flash to take the rest of these photos because it was almost pitch black outside! 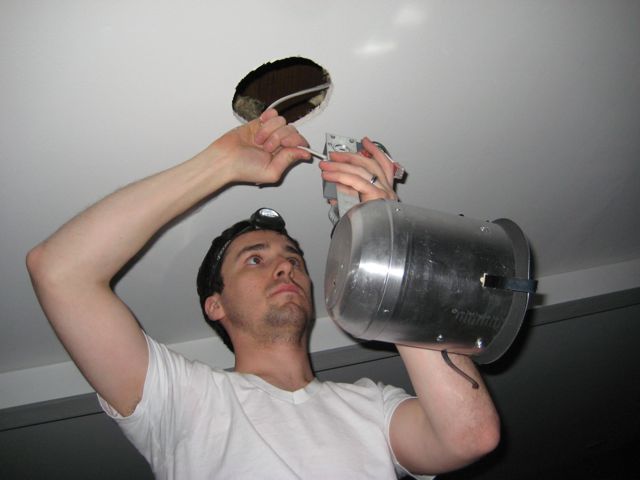 Once the it was wired, he pushed the can light up through the hole. 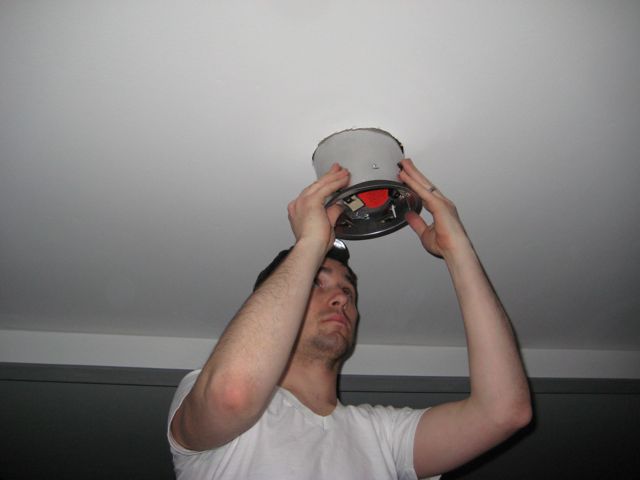 Then Stephen flipped up the little tabs inside the light to secure it in place. 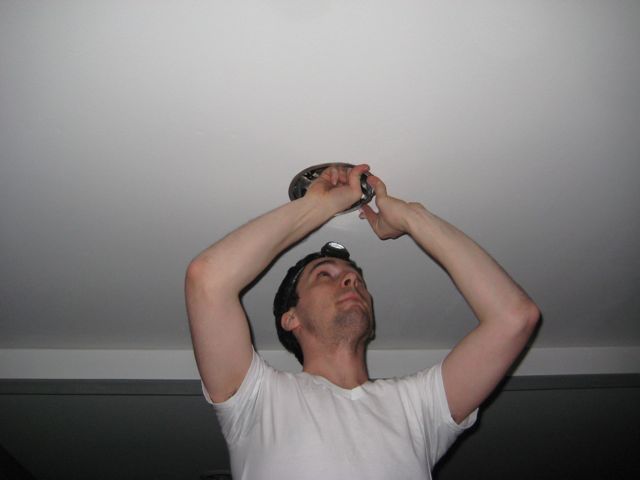 The last step was installing the trim and lightbulbs.  Here’s the finished product with the lights off. 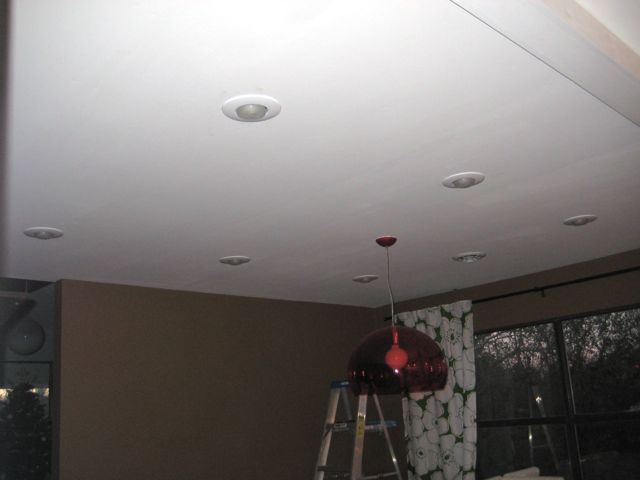 And here’s a preview shot of the dining room with our new can lights!  You can see we had a lot of cleaning to do once we were done, but the house warmed back up quickly and we made quick work of the clean up.  Isn’t it funny how much faster you can move when you’re warm?! 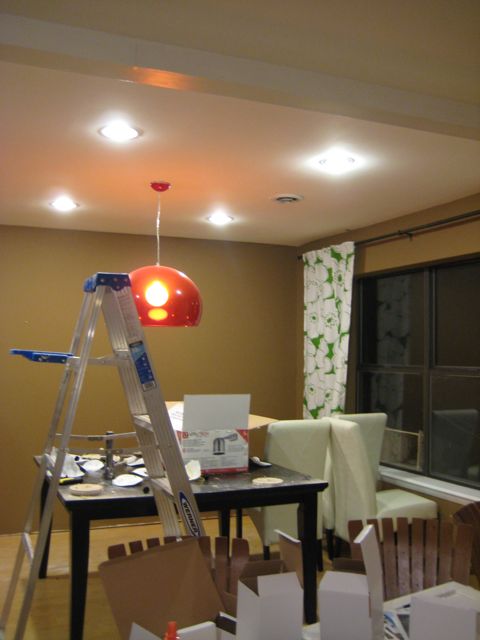 I can tell you I was a little worried when we were at the “holes in the ceiling with exposed wires coming out of them” stage, but I love how the lighting turned out!  I’ll be back tomorrow to show you the finished result (and more photos of our dining room than you’ve probably ever seen on this blog).  See ya soon!

This entry was posted in building, dining room and tagged cutting drywall, dining room lighting, drywall saw, how to measure for can lights, installing can lights, recessed lighting. Bookmark the permalink.