The baby shower we hosted at the office on Wednesday for Lena was a success!  Angela, Leslie, and I decorated the dining room with balloons, decorations from the last shower, and photos of Lena and her husband as babies.  Her friends had fun guessing which baby was her and which one was Chris. 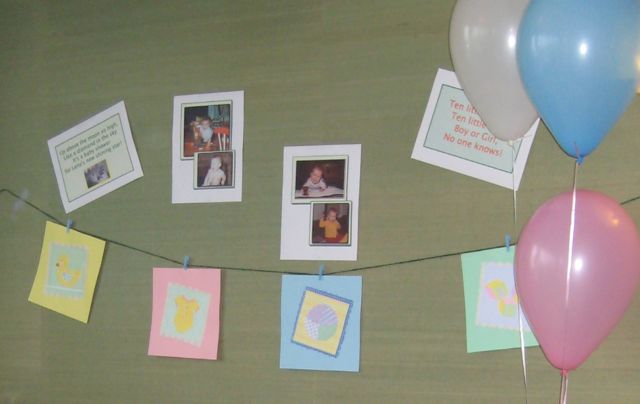 We were pleased with the turnout – even the guys from Lena’s team dropped by for some cupcakes and punch and gift-opening.  Leslie’s and my cupcakes looked so cute together on a big tray we borrowed from the kitchen, and the punch was delicious (scroll down for a quick and easy punch recipe).  We also had fruit skewers, a cheese/ meat/ cracker tray, and our favorite, Andes mints. 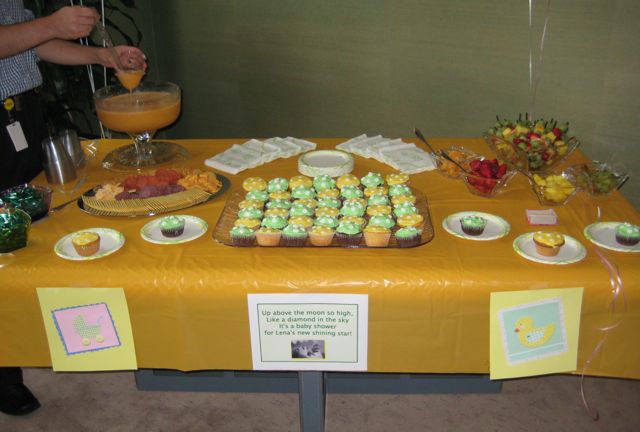 Leslie and I went in on a gift card for Lena and her husband, and Leslie had the genius idea to wrap it in a diaper and write HAPPY DIAPERING on the front.  Paired with a fluffy yellow bow, it was a cute, fun way to give a simple gift card.

I was completely impressed with my friend Lucie’s gift to Lena.  She took little onesies and rolled them up to look like flower blossoms.  Paired with green tissue paper and some little yellow faux flowers in a watering can, it was such a cute package, I don’t know how Lena will make herself unwrap it! 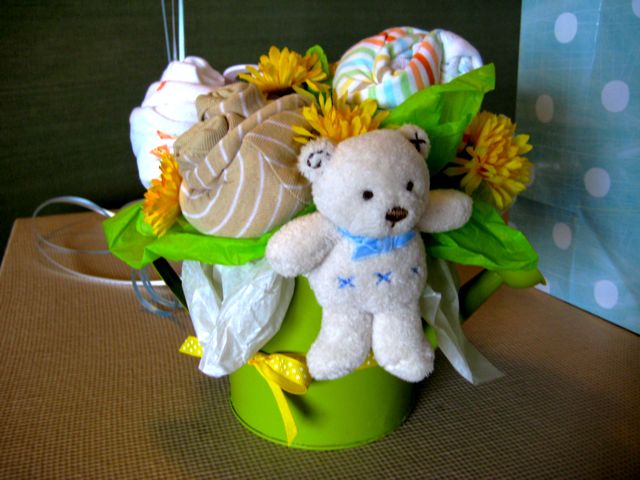 Lucie originally saw the idea online, where the bouquet was made out of little socks, but her onesie version looked just as good, if not better!  Her secret?  Lots of tape and pins (and TIME, I’m guessing!) to hold it all together.

Here’s a final shot of the hostesses and the soon-to-be parents.  Now that several of our friends have gotten married, with a few more coming this fall and next summer, I have a feeling this is just the beginning of the Baby Shower Phase of our lives!  What a great way to start! 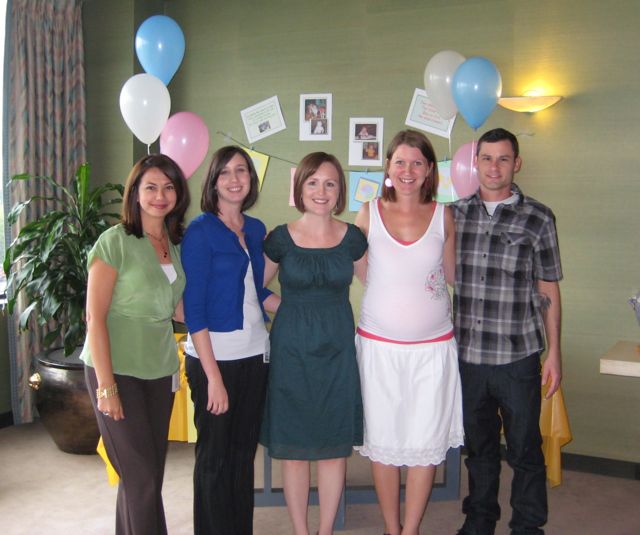 As promised: the quick and easy punch recipe I found online:

This recipe serves approximately 20.  When the punch bowl was half empty, I added another can of orange juice and half a 2-liter of ginger ale.  The second bowl of punch was a little more “zingy” and less sweet than the first, but it was still good and saved the trouble of trying to stir in another ½ gallon of sherbet.

Next time I might try using half the sherbet and half a tub of vanilla ice cream for a more creamy drink.  I’ve also heard using raspberry or lime sherbet and a can of concentrated limeade makes a tasty combination.

So there’s the rundown of my first baby shower co-hostessing experience.  Do any of you have never-fail baby shower décor, gifts, or recipes?  We could all expand our repertoires a bit, so please share those fabulous ideas!